View More
Today as part of the National Wildlife Week let`s look at a currently ongoing phenomenon - migration!
Many bird species and some mammals as well (most notably bats) will migrate in the fall when days are getting short, weather is getting colder and food is more scarce.  The distance and timing of the migration varies a lot from species to species and can be as short as just down into the USA or as far as South America.  These birds spend the winter months molting their feathers, feeding up and preparing to come back north for breeding season.
Right now on Grouse Mountain we are starting to see the return of many migrants.  Some of the earliest ones are the American Robin - this chirpy bird appears in the early spring and starts looking for good nesting locations.  Soon we`ll see our local Barn Swallows return and begin to build their mud nests - this typically starts in mid to late April.  Already at the base of the mountain many migratory species are showing up and the breeding bird calls are beginning!


One of the more interesting behaviors we see up here on Grouse Mountain is nocturnal migration. Many bird species including thrushes, sparrows, warblers, tanagers and even ducks and geese are known to migrate only at night. This has a twofold advantage of being safer from daytime predators such as birds of prey and also easier for navigation as the birds, like the sailors of old, will use the stars to go guide their flight direction. Scientists use radar installations to track the movements of large flocks of birds at night (see image below) and can even estimate the numbers of birds based on the density signature of the radio waves. Walking around on the mountain at night during this migration is pretty fascinating. Silhouettes of birds flying across the moon or stars can be observed and strange contact calls can be heard going back and forth from flock members. We also see birds, such as a flock of Tanagers the other night, stopping by our ski lights to rest or to try to feed (though there are relatively few insects to find these days!). Check out this video here to see a sample radar animation of bird flocks migrating over North America. 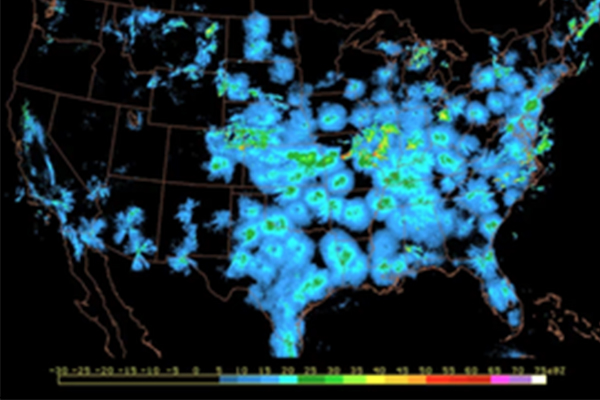 Large blocks of light, such as downtown urban areas, are often responsible for many deaths during nocturnal migration. The birds get confused by the light and fly towards it unaware that it may be a large glass building. Many cities have started instituting mandatory light`s off at night in skyscrapers during migration and this has helped reduce the numbers of birds affected. If you work in a large building or live in an apartment or large house you can help out nocturnal migrants by making sure lights are off at night during spring and fall migration. For more information you can check out the FLAP (Fatal Light Awareness Program) website to learn more.
In addition to birds, some bat species are also migratory. Here on Grouse Mountain we`ve noted flights of Hoary Bats passing by us each spring and fall. These large bats head south to the southern USA and Gulf of Mexico coastline to spend the winter. They return to BC to breed. Through automated ultrasonic detector installations we can observe the numbers of calls and see when the frequency peaks and we known we`re at the height of migration at that time. Hoary Bats will also roost in old and decaying snags during migration when they need to rest - so you can help them out by leaving old trees on your property or only topping dead trees (for safety) rather than removing it entirely.
Finally, all birds need fuel during migration so you can help them out by maintaining bird feeders on your property. Having a variety of food will increase your chances of seeing different species. Seed, suet and hummingbird feeders are a good selection to provide. Please make sure to keep them clean and also practice bear safe bird feeding by utilizing feeding poles to keep the feeders out of bear reach and skirts around the outside to make sure seed is not falling to the ground. It`s also a great practice to learn which species come to your feeder and keeping a track of the first day each season you see them! It also reminds you that spring and summer are right around the corner after a long winter! 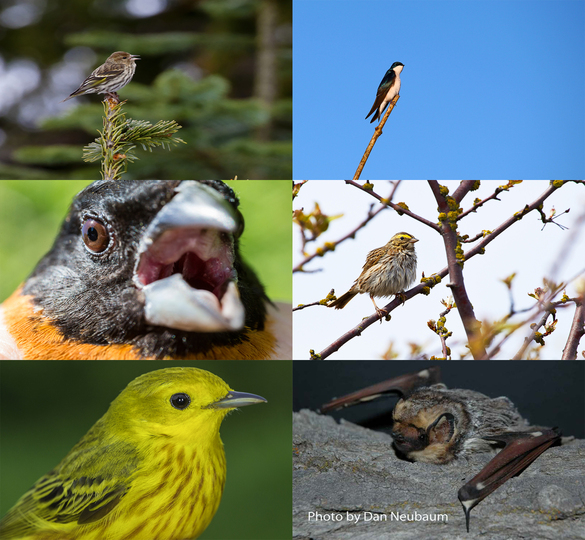 To ensure you’re prepared for your visit, please check current conditions and the status of activities before arriving at Grouse Mountain. Grouse Mountain is requiring all guests (born in 2009 or earlier) to be fully vaccinated against COVID-19.