If there’s one thing we West Coast dwellers know, it’s that Nature is an unpredictable force. While our climate is generally regarded as the most temperate in Canada, we are nevertheless susceptible to dramatic spikes and drops in temperature, prolific rainfall, seemingly endless sunshine, unexpected snowfall, dense fog and strong winds. 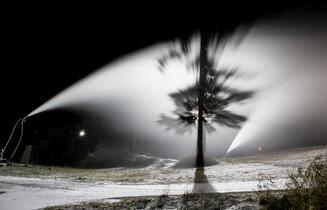 In response to Nature’s fickle behaviour, we have invested heavily in technology that helps us mitigate the effects of unpredictable weather patterns. Grouse Mountain has invested significantly in snowmaking equipment. This investment, we believe, helps afford our guests and season passholders the best possible conditions throughout the winter.
Accordingly, we have spent countless hours developing and honing our snowmaking strategy. The result: we consistently provide the longest and most reliable snow season on the North Shore.

You will often hear people speak of “artificial snow”. This is a misnomer. While the means of producing snow with the use of a snowmaking fleet is a human orchestrated process, the end product (i.e. snow) is created using the same meteorological method and is very much the real thing! “Man-made snow” is, therefore, a much better term.
The two key ingredients in any recipe for snow are always the same: water and air. The variables that determine the quality of the snow and the ability to make it are, however, numerous and varied. In other words, just because the thermometer reads –5 degrees Celsius doesn’t mean that you have the right conditions to make snow. Humidity, wind, air pressure, water & ground temperature, topography- these are all major factors that must be considered by the professional snowmaker. This is why those in charge of a resort’s snowmaking fleet are often thought of as a combination of artists and magicians!
Basically, every snowflake, whether natural or man-made, is small particles of ice. Our snowmaking machines make snow by breaking water into small particles, cooling the water (by causing them to move through cold air), nucleating the water particles, and distributing the resulting snow on the surface.
The system consists of:

In total, Grouse Mountain has a fleet of 51 snow guns. These are supported by:
The 33 Fan gun fleet consists of guns manufactured by Snow Machines Incorporated.
The 18 Air/Water fleet consists of:
Grouse Mountain draws utilizes a water source, located in the alpine area, licensed from the Crown. We do not tap into municipal water supply for the production of snow. This water supply is replenished naturally throughout the spring as alpine snow melts.

Prolonged snow season: We can stretch later into the spring as the result of greater snow volumes on our runs.
Earlier starts: With the use of man-made snow, we can compliment our natural snowbase enough to get our season underway early.
Strategic snow placement: We can ensure that we get the coverage we want, where we want it. Often this means that more advanced, feature-laden runs get open earlier.
More skiable days throughout the season: While we are always humbled by Nature's enormous force, we are not entirely dependent on its contributions to our snow base. We are often producing snow even when there hasn't been a trace of natural snowfall for weeks.
Longer lasting snow coverage: Man-made snow has different properties that enable it to better endure weather fluctuations.
Quick recovery time: Following unseasonable warmth and thawing, we can begin pumping snow back onto the slopes within 24 hours, if overnight temperatures permit it.