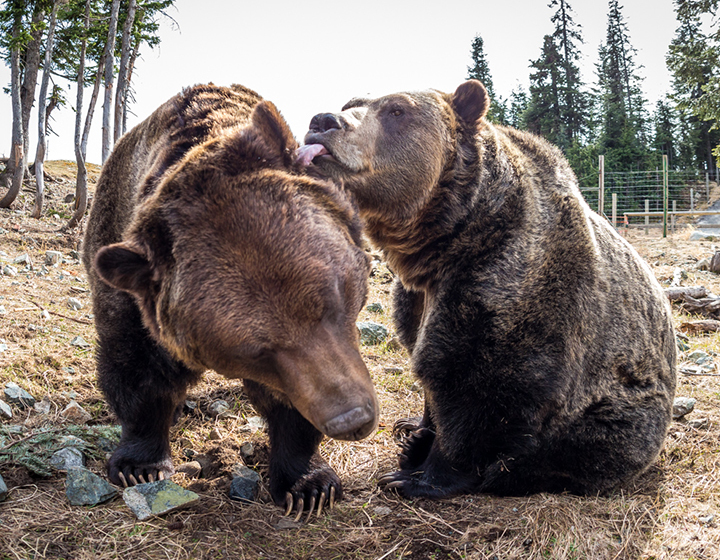 Learn more about Grinder and Coola, the two orphaned grizzly bears at Grouse Mountain's Refuge for Endangered Wildlife. When you visit Grouse Mountain in the summer months, be sure to check out our daily Ranger Talks.

When grizzly bear cubs are born they only weigh approximately 0.9 kg (2 lbs) and full-grown grizzly bears usually weigh between 270 and 360 kg (600 and 800 lbs).
The heaviest grizzly bear that people have ever come across weighed 680 kg (1,500 lbs)!
Before their first hibernation in 2001, Grinder weighed 62 kg (137 lbs) and Coola weighed 78 kg (173 lbs). They lost about 1/3 of their body weight during hibernation, which is typical for grizzly bears.
When full grown, Grinder is expected to weigh up to 318 kg (700 lbs) and Coola up to 364 kg (800 lbs).
But, despite their massive size, grizzly bears are no slow pokes! They can run at speeds up to 55 km per hour over most terrain!
Grizzly bears are often various shades of blond, brown, black or a combination of all three. Colour is usually affected by spring shedding, growth of new fur, nutrition and climate.
Grinder is quite blond while Coola has much darker fur. This is because they came from quite different areas of British Columbia.
Grinder is from the interior of BC where the climate is dry and there is a lot of grassland.
Coola is from Bella Coola, on the coast of BC, where the vegetation and landscape is much like here, very dark, and green.
How can you tell the difference between a grizzly bear and a black bear?
It's not as easy as you may think, as colour is not a good characteristic to distinguish between the two types of bears. You are better off relying on other physical features.
Grizzly bears have large rounded heads with concave facial profiles, small rounded ears that are set well apart, very long claws and toes that are close together in a relatively straight line.
Black bears, on the other hand, do not have shoulder humps. They have long, straight facial profiles, large ears, much smaller claws and toes that are spaced apart with a more rounded arc.
Close