View More
I was woken this morning by a high-pitched chirping bird call and upon further investigation I discovered that a pair of young Sharp-shinned Hawks, or Sharpies as they are affectionately referred to, were practicing their hunting outside the Wildlife Centre here on Grouse Mountain.  Their chirps seemed to be out of frustration at their lack of success.
Their target?  Steller's Jays.  Jays present a very ambitious target for a young bird as they are quite large, feisty and definitely quite intelligent. 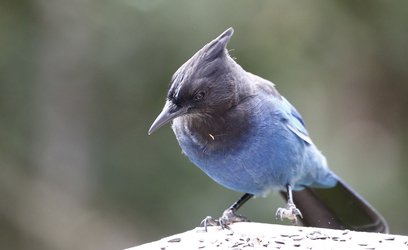 I watched the Sharpies for quite some time, and their tactic of wait and ambush seemed to be failing since the Jays were highly aware that the hawks were around and out for breakfast.  What was surprising was just how un-caring the Jays seemed to be.  They'd send out a warning call when the Sharpies took off and move out of the way when one came by but they did not panic and fly out of the area or stop making noise and hide.  One of the more interesting encounters when when a hawk chased a Jay only to stop short and land in a branch - the Jay then proceeded to turn around and go after the hawk, chasing it away. 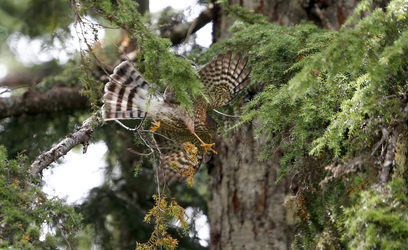 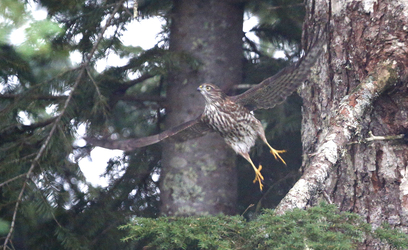 The Sharp-shinned Hawk is the smallest Hawk species in Canada and the United States.  It weighs between 90 grams (small Male) and 250 grams (large Female) and lives in dense forest, hunting small songbirds and rodents.  It is a 'pursuit hunter' that ambushes it's prey and is deadly accurate with its acrobatic flight through the dense tree branches (when fully trained that is!).  Sharpies suffered during the DDT crisis in the late 1960's, as did many birds of prey, when the pesticide caused massive problems with the success of laying and rearing young.  They have since recovered and are doing fairly well as a species.
Keep an eye out next time you are in the woods and if you see a blurr of feathers go darting by in pursuit of another bird, you've mostly likely seen a Sharp-shinned Hawk. 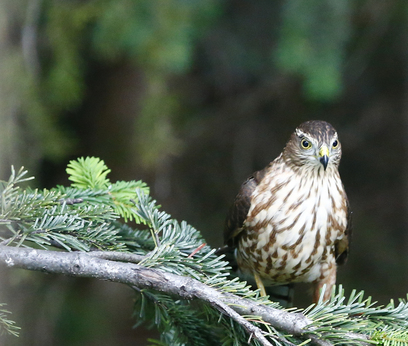 From all of us at Grouse Mountain, thank you for joining us during our winter season! We'll see you on the slopes next season! Guests should adhere to current public health orders and travel restrictions. Indoor dining has been paused until May 24th, 2021 but takeout and patio options are available - learn more.