View More
Today, four adolescent Black-tailed deer came up the mountain from Critter Care Wildlife Society, a local wildlife rehabilitation centre. These deer were orphaned on the North Shore earlier this year and were brought to Critter Care to be raised and provided for until they were old enough to be released back into the wild.
Critter Care is partnering with the Grouse Mountain Refuge for Endangered Wildlife to return the orphaned deer to the North Shore wilderness through a process called a 'soft release'. When returning wildlife back to the wild the terms ‘hard release’ and ‘soft release’ are often used. A ‘hard release’ is where the wildlife is brought straight from the rehabilitation centre to an appropriate release spot and turned loose right away. The downside to a hard release is that the wildlife has no point of reference or fidelity to the location chosen and often bolts or runs away from the carefully chosen site – often to a spot with worse resources. A ‘soft release’ protocol involves moving the wildlife to a contained location near good resources. The animal is kept in a habitat (utilizing a fence-line or aviary etc.) until it has acclimated to the surroundings and become familiar with the sights, sounds and smells of its new home. After a short time period, often one to four weeks, the gate to the holding area is opened and the wildlife inside is allowed to leave on its own schedule. Many times the wildlife comes back for the nights or still utilizes the familiar areas inside the habitat. Once they have found a good nearby location during their daily wanderings they will then abandon the habitat area and it can be closed up.
This soft release concept is what we will be utilizing on Grouse Mountain for this small herd of deer utilizing a temporary area in a grove of trees off of the side of the plateau area. We have great deer habitat here on the mountain, as is evidenced by our healthy population of local deer. Since these are deer that will be returning to the wild, we ask that all guests please stay to the trails when around the deer habitat and not approach the fenceline or the deer - the idea is to let them settle in and not become accustomed to humans.  Thanks for your help with this!
A few Black-tailed Deer Facts:
-  Black-tailed deer are a subspecies of Mule Deer and are found in forested mountains along the Pacific coast from California to Alaska.
- Black-tailed males, called Bucks, grow new antlers each year. Females do not have antlers.
- Black-tailed deer are ruminants with four stomachs. Their preferred food, which includes new plant growth, acorns, berries, fungi, grasses, lichen and nuts is digested multiple times to extract all of the nutrients.
- Does weigh up to 130 pounds, and bucks can weigh 200 pounds.
- Deer are outstanding swimmers and jumpers.
- Black-tailed deer communicate with each other using over 10 different vocalizations. 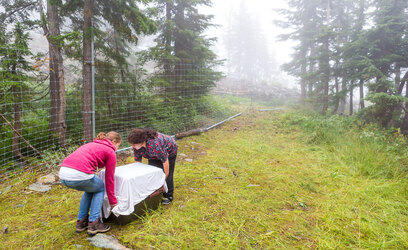 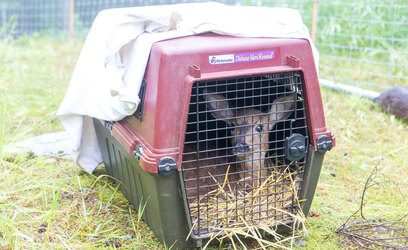 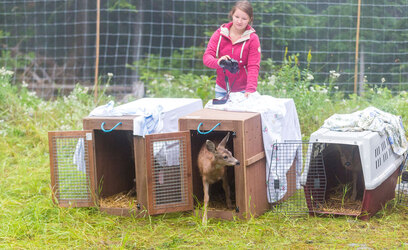 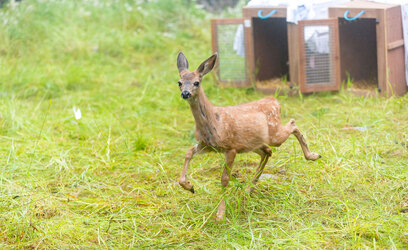 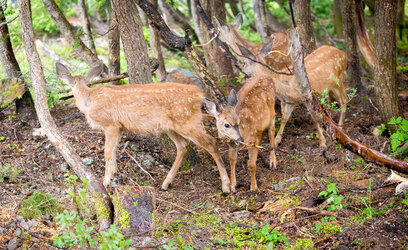 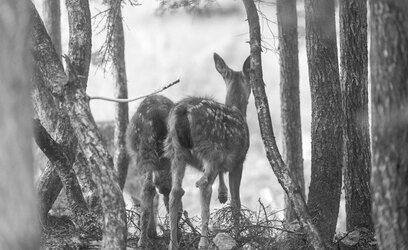