Despite starting strong, many prospects found the grueling hike to be a bit more difficult than they initially anticipated.  Assigned to teams of five or six players, the first group clocked in around the 45-minute mark.

Following their ascent of the Grind and a little bit of well-deserved recovery time, the future of the Canucks paid a visit to Grinder and Coola in their habitat and also had an opportunity to say hello to a few of our Birds in Motion.

Click here to view a photo gallery of the day and here to watch a video of the Canucks' prospects Grouse Grind experience. 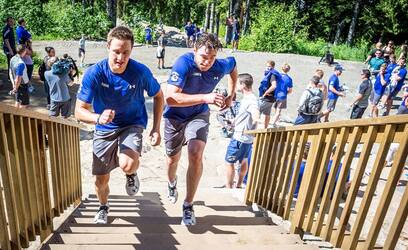