American Black Bear (Ursus americanus) can be seen wandering the slopes and valleys of Grouse Mountain from time to time. Black Bears are the most plentiful bears in North America and British Columbia itself is home to over 120,000 Black Bears. It may surprise you to know that Black Bears are omnivorous and feed mostly on vegetation. They can be seen foraging for berries, grasses, nuts and other plant matter which comprises 80% of their diet. That being said, if a good chance for a meat meal such as fish or venison comes along they won't turn it down! Black bears have an amazing sense of smell and can find food from far away. This often gets them into trouble with the local human populations - please remember to keep your house and yard bear safe if you live anywhere near a forest in BC! 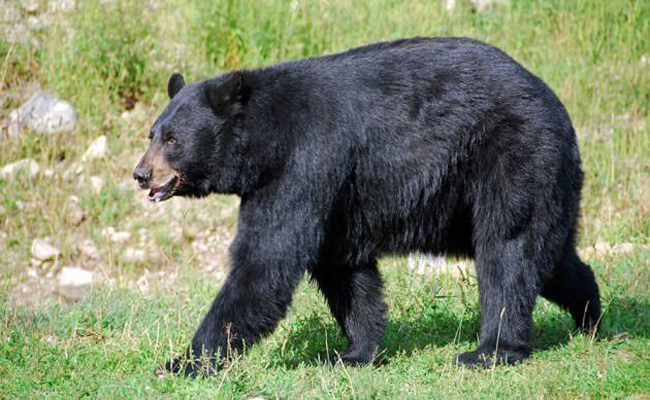 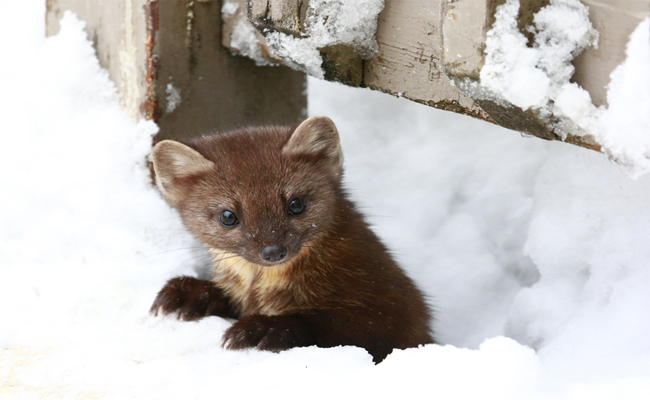 The American Pine Marten (Martes americana) is perhaps one of more vicious wild animals on Grouse Mountain. It is a member of the Mustelidae family, with such distinguished members such as badgers, mink, otters and wolverine. It gets its name from living amongst the tall coniferous trees here on the coast of BC. In the past they have been hunted for their fur and their pelts were often traded in colonial times. A male Marten can be very territorial and males can roam a large territory up to 8 square kilometers. He will chase away or fight with other males in this space but will allow multiple females for mating. They have a high metabolism so are almost always on the hunt for small mammals such as squirrels, chipmunks and rodents. They will also hunt birds with strong leaps, and will forage for insects and carrion if hunting prey is scarce. They are known for their ferocity, however, and will often take on prey larger than themselves such as snowshoe hares and marmots. Keep an eye out in our tall grasses and trees this summer if you are out hiking - you might see a Marten skulking nearby!

Probably the most common mammal seen on Grouse Mountain is the Douglas Squirrel (Tamiasciurus douglasii). This chestnut brown, small sized squirrel, can be seen running around or charging up and down trees. Their high-pitched chirp is another sign that they are nearby - it is often mistaken for a bird call but is used to warn others of danger or to declare a territory. They are much smaller than the introduced Eastern Gray Squirrels that live in the city and in fact where their ranges overlap it is often the Douglas Squirrel who suffers and is pushed out of areas by the larger Grays. They spend their summer days foraging for food such as seeds and nuts and storing them in caches for the winter. They often find pine or fir cones and peel back the scales to get the seeds - if you run across a large pile of these cone scales at the bottom of a tree you've found a favourite food prep area of a Douglas Squirrel known as a midden. Several generations of squirrels from one family can use the same midden causing them to grow to large sizes over a meter in both height and diameter. 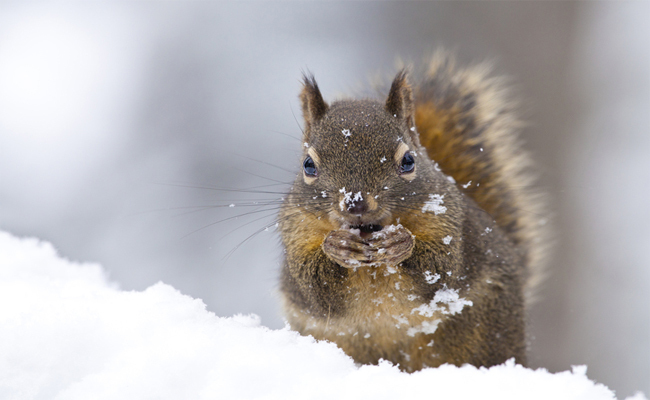 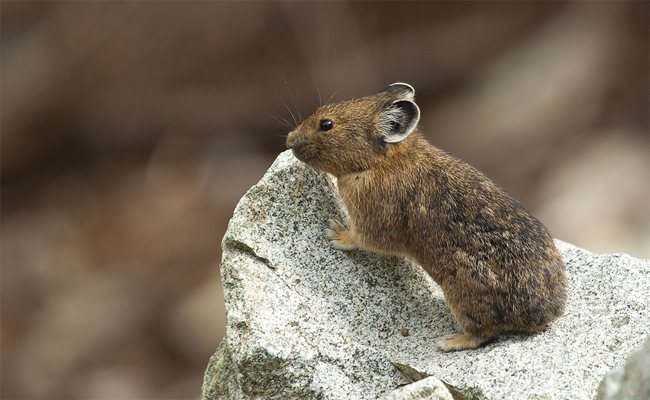 If you venture up near our Eye of the Wind turbine on Grouse Mountain or out onto some of our rocky ski-slopes in the summer you're sure to run into, or at least hear, an American Pika (Ochotona princeps). These cute mammals are cousins of rabbits and hares even though they may look more like a mouse or tail-less squirrel. They live underneath rock rubble in sub-alpine and alpine areas and spend their summer days drying food (a behavior known as 'haying') for storage for the winter. Come snowfall they do not hibernate like other mammals might, but rather live under the snow and rocks surviving off their food stores they have prepared. Because they are so sensitive to temperature change and cannot survive extended or unseasonably hot temperatures the Pika has become an indicator species for Climate Change. Unfortunately many populations are suffering due to warming conditions.

You can run into the cute Snowshoe Hare (Lepus americanus) anywhere on Grouse Mountain but they are most often found near an easy escape to cover such as under buildings or into dense bush. They get their name from their large back feet, their 'snowshoes', that work as described and allow them to move quickly over snow. When startled, they can run up to an impressive 45 kilometers an hour and jump nearly 3 meters!! This of course is to get away from predators such as coyotes, cougar, eagles, owls and others. They also have a really neat adaptation to change their fur colour from white to brown between the winter and the summer! This helps keep them camouflaged. Did you know the difference between hares and rabbits is that rabbits dig burrows underground and have babies that are furless and helpless while a hare spends all its time above ground hiding under shelter and their babies are born eyes open and already with a fur coat ready and within a couple hours of birth are ready to start hopping after mom! 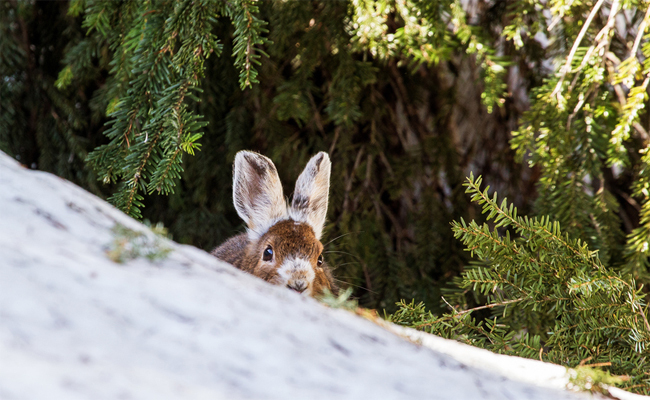 Columbian Black-tailed Deer (Odocoileus hemionus columbianus) are often found wandering the slopes of Grouse Mountain foraging on grasses and flowering shrubs. They are a sub-species of Mule Deer whose range extends from mid to southern BC down to California in the south. They are often referred to as 'Ghosts of the Pacific' since they have an ability to move silently through the dense rainforests of the coast. Named for their characteristic black-tail, these deer move up and down the mountains following the food and snowline. During the mating season the males spar with each other to win a female's attention. The females then gestate over the winter and give birth to two fawns in the late spring. The mothers can leave the fawns un-attended while they go to forage so if you ever run into a baby deer with no sign of mother please do not disturb it but check back later in the day to see if it has reconnected with mother.

The Coyote (Canis latrans), a member of the dog family (Canis) is found all over North America in many different environments. Here on Grouse Mountain we see them mostly at night and on quiet summer evenings you can even hear the yipping of a small pack that live on our Cut ski run - they can be very vocal as they communicate amongst themselves. Coyotes are scavengers and will eat just about anything but here on Grouse Mountain we've seen the hoping in the grasses catching small voles and mice. Coyotes tend to be monogamous and mate for life - their litter size can range from 3 to 12 pups. Coyotes do not present any danger to adults but young children should be supervised closely if hiking or walking through coyote territory at night. 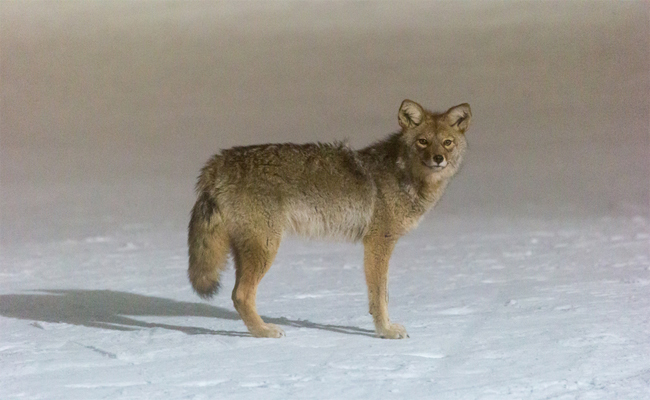