View More
Yesterday we held our first hummingbird monitoring session of 2016 and it was an incredible day for early May!  The Grouse Mountain Hummingbird Monitoring Project was started in 2005 and was established as part of the Hummingbird Monitoring Network of western North America.  The goal of the project (and our local project) is to monitor the long term population numbers of hummingbirds with a focus on the Rufous Hummingbird.
The project involves gently catching hummingbirds as they come to the feeder, taking some measurements, looking at the overall health of the birds, placing a very lightweight band on their leg (each band only weighs 5/100's of a gram!) and releasing the bird on its way.
Normally we'd expect to get just a few hummingbirds in the early season,  but because of a nice stretch of sunny weather we ended up catching, measuring, banding and releasing 15 hummingbirds of two different species.  We banded 9 Rufous Hummingbirds and had three returning birds banded in previous years (2014, and 2015 in this case!).  We were also thrilled to see three gorgeous adult Male Anna's Hummingbirds coming up from the coast to visit our feeders here on Grouse Mt.
Overall it was an incredible day for early May.  It bodes well for the rest of our monitoring season which lasts until early August.  This study is very important because there appears to be a general decline in hummingbird numbers due to deforestation and development along their traditional migratory routes.
Please stop by our Hummingbird Garden in front of our Chalet next time you are up on Grouse Mt. and watch these amazing birds at the feeders and flowers! 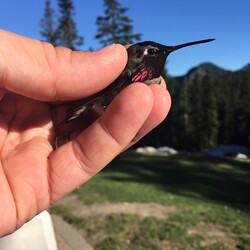 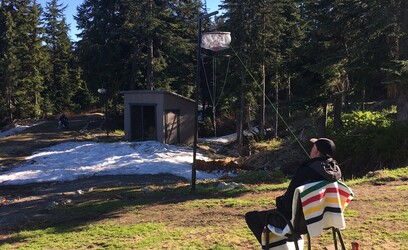 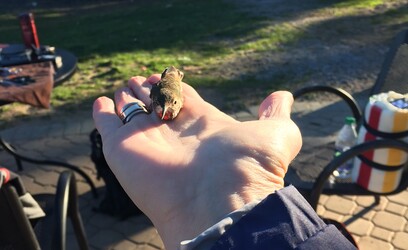