View More
Grinder and Coola, our two resident Grizzly Bears, have now been at the Grouse Mountain Refuge for Endangered Wildlife for 16 years! During this time we've seen them grow from 60lb cubs to the full size adult bears that they are today. For most of their time here we could only weigh them during their medical check-ups when they were under sedation, but a couple years ago we installed our new bear scale so we could get more regular weights.
Grinder, being the bolder of the two bears, immediately checked it out and in fairly short order started stepping onto it and even sitting on it watching us do our work and bring the bear food out. Coola, ever suspicious, checked it out and decided he would have nothing to do with it. Despite our best efforts at bribery Coola is still very hesitant to step on the scale! I guess he might be a little sensitive about his weight.
Before hibernation last year we weighed Coola, under sedation for his medical check-up, in at 1005 lbs. This was still about a month before hibernation so we estimate he probably was around 1050lbs going into hibernation. Just before hibernating, Grinder, ever eager to show us his weight, stepped on the scale and weighed in at 900lbs.
Fast-forward to five months later and the first week of May 2017. Bears in the wild can lose anywhere from 15% to 25% of their pre-hibernation body weight depending on conditions and length of hibernation. Their metabolism during this time largely shuts down and when nutrients are needed body fat is burned off. Upon waking any remaining body fat is consumed as the bears wander looking for food, which can still be scarce in the early season.
As usual, Coola has been avoiding the scale since waking up but Grinder has stepped on a couple times for us now and proudly shown us his lean and trim weight post-hibernation. He has lost closer to the 25% amount as it was a longer than normal winter dormancy period for them and is now weighing in at... (drumroll please)... 687lbs as of this morning (May 8). If we extend this same percentage to Coola we can estimate he must be around 800lbs.
This sleeping for the winter is quite a good weight loss program!! Follow along with the blog and we'll weigh in with Grinder's weight as the summer progresses and maybe even Coola's if we can convince him to get on the scale. Usually we see a period weight stabilization during the summer months and then a steady gain as we approach hibernation time in the fall.
For now, Grinder believes some more food is in order! 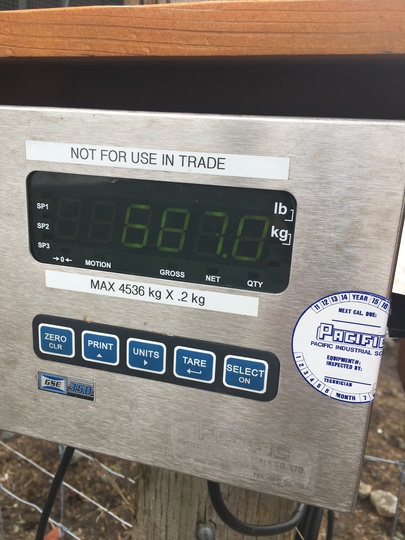