View More
After ten weeks of training of training with Kintec, armed with knowledge from City Sport Physio and nutrition tips and supplements from Vega, we hit the ground running for Grouse Mountain's 10th annual "Seek the Peak" presented by Columbia.

Weather could not be better as the sun was shining on the 800+ racers who bravely made their way out to Ambleside park which would serve as the official start line. Racers were greeted with water from Whistler Water, music from Michael Tedham and pre-workout supplements from Vega. Those who registered early were also given awesome event shirts from Columbia, complete with their Omni-Freeze technology that truly does keep you colder while exercising (Michelle can attest to this!).

As followers of these blogs know, Michelle and I ran this grueling race as part of a relay team. I can say that after only running the last 3km portion of the course, those who run it solo are an inspiration. Our good friends Brenda and Mike were crazy enough to come along with us on this gorgeous day. The first stage for relay runners had racers (in our case, Brenda) leave from Ambleside and follow the Capilano Pacfic Trail for 4km until they reached their teammate. Michelle's leg took her back on to the Cap trail, past the fish hatchery and finished off her 6km route with a steep jaunt up Nancy Greene Way until she met Mike at the base of the Grouse Grind. Mike took on his specialty, the Grouse Grind. For some of you who may remember, Mike tried to beat Sebastian Salas' official Grind record a couple of years ago. He was unsuccessful in achieving the lofty goal but he did help the Township of Langley Local 4550 Professional Firefighters raise over $10,000 for BC Children's Hospital burn unit in the process. Gareth and Mike tagged off at the Grind Timer at the base of the chalet. From there Gareth would run past iconic ski runs like The Cut and Heavens Sake on his way to the top of The Peak. The view was short lived as the finish line was back down the mountain at the base of the Chalet.

Racers were greeted by cheering supporters, fellow racers and teammates at the finish line. Vega, Columbia and others had displays and samples set up. Grouse Mountain was grilling up a storm for hungry finishers and for those who needed a little care and attention, City Sport Physio was onsite, there was even a post run Yoga class. 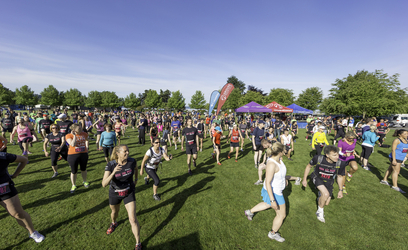 This years top finisher was Shaun Stephens-Whale with a time of 1:25:30. Your team of bloggers finished 2nd in the Coed Relay division and 8th overall for relay teams, not bad for first timers! Michelle and I will most certainly be back next year and we have vowed to run it solo...but side by side.

We would like to thank everyone for reading along, for Grouse Mountain asking us to blog (another first for us), the trainers from Kintec and for all of the folks who came out for the training nights and supported each other. It was a great event for us, a successful event for the BC Cancer Society and we can't wait to do it all again next year!