View More
One of our popular programs up here at Grouse Mountain is our wildlife web-cameras.  Our Hibernation Bear Camera was one of the first wildlife cams available in the world back in the early 2000's and now our summer and winter bear cameras are a huge hit with fans of Grinder and Coola world-wide.
In the last couple years we've expanded to include a few other species.  Last season we had a honey  bee camera and a nesting Barn Swallow camera.  This year we thought ourselves clever in getting our Swallow Camera up and in place well before the Barn Swallow's arrived in late April/early May.
We carefully placed the camera across from the nest that the pair had used last year - located on top of one of our mountaintop buildings and waited for the birds to arrive and start nesting.
We noticed the pair were back and checking out the nest, but not carrying out any preparations.  We were worried that they were going to abandon that nest in favour of moving to a different location - we were worried maybe moving the camera had interfered somehow even though we had it up well ahead of time.
Then, as nesting season was getting fully underway a couple weeks ago, the Barn Swallows went into a flurry of activity and almost overnight built a new nest - directly *on* the camera!
We're not sure why that location was more appealing - perhaps the camera has some warmth or better insulation properties or offers a better vantage point from under cover - no matter the reason the swallows preferred it over their nest from last season.
We now see that the female has laid four eggs (We took a quick peek in when she was off foraging) and is in the incubation stage which lasts about two weeks before the eggs hatch. Needless to say, we've taken down the feed for our Swallow Cam as it was watching an empty nest while all the action was going on right above it!
Stay tuned and we'll keep you informed on how this nest does and how the young grow up!  Once hatched, the baby birds will stay in the nest for about three weeks (or slightly longer) until they fledge - leaving the nest for the skies! 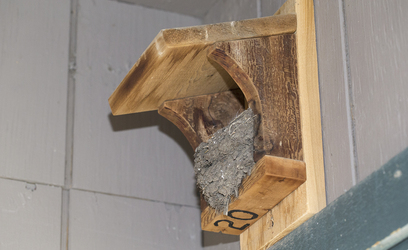 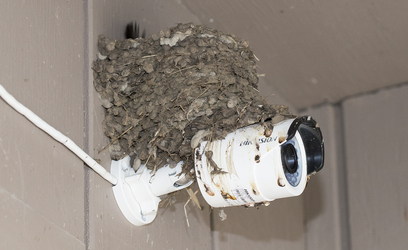 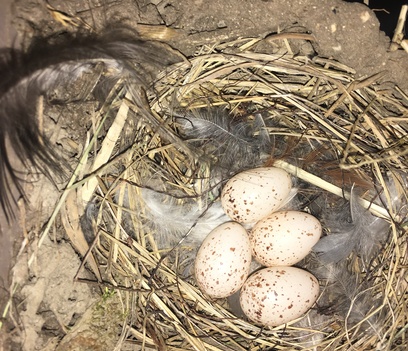