View More
Recently we installed a new addition to our bear habitats - a commercial grade weigh-scale!  We want to use the scale to get a record of Grinder and Coola's weight throughout the seasons and chart the change.
The scale had to be bear proofed to make sure the bears didn't play around with it too much.  So we poured a concrete foundation, made a steel frame and installed the scale inside that.  A steel tube surrounded by concrete carry the power and connections to the scale which has it's read-out display mounted on the outside of the fence where we can monitor.
The next challenge:  Grinder and Coola, like most bears, are afraid of new things and changes to their habitat are often viewed with a lot of wariness on their part.  As expected, they gave the scale a wide berth every time they passed by its vicinity.  So we had to do a bit of encouraging via food to get them to warm up to the scale.  Our goal is to have them not care that scale is there and view it as part of the habitat.
Grinder is at that point already and just the other day he stepped right up onto the scale and we were able to get a weight on him for the first time in several years - 844.5 lbs!  A good pre-hibernation weight.  Coola, however, is the more suspicious of the two bears and is still hesitant to approach the scale.  We're continuing to work with him and hopefully he'll soon realize that the scale means him no harm!
Stay tuned for an update once we get Coola's weight as well! 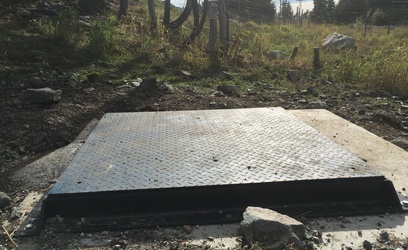 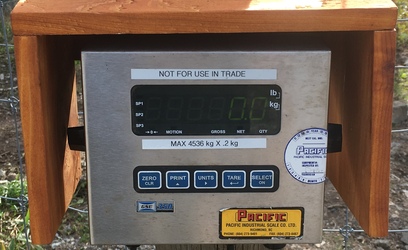 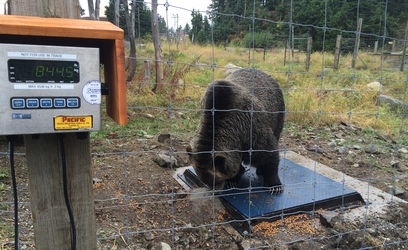