The Grouse Grind® is a 2.9-kilometre trail up the face of Grouse Mountain, commonly referred to as “Mother Nature’s Stairmaster".
If you are hiking up the Grouse Grind, purchase a Download Ticket for your Skyride trip down the mountain.
Masks are required on the Skyride at all times.
Book Download Ticket
Cooperatively supported by Grouse Mountain Resort and Metro Vancouver Regional Parks, this trail is very challenging. Keep in mind that there is a wide range of mountaintop trails that might better suit the average hiker.
Before your visit, please check Today's Hours on our website for current Grouse Grind trail hours.
Today's Hours
Please note that bag transfer is not currently available.
Learn more about Metro Vancouver Regional Parks.

A Grind Timer card is a great way to track your training and accomplishments on the Grouse Grind. Swipe your card at the Grind Timer at the base of the Grouse Grind, and again at the top of the trail, and your name and time will appear on the monitor at Alpine Guest Services in the Peak Chalet. You can check your results on our website and app, or your results may also be printed for you at Alpine Guest Services.
Buy a Grind Timer

The Grouse Grind Facebook page is a great place to meet and keep in touch with other hikers. There is a discussion board, photo albums and link uploads where our fans can share information. We will also be sending out Facebook updates to all fans with changes in hours of operations and other important news about Vancouver's favourite trail.

The Grouse Grind® Mountain Run is held annually in September. This classic Vancouver event is the true test of your season training.
Whether you are participating to set a new personal best Grouse Grind time, to raise funds for BC Children’s Hospital, or to simply enjoy the trail, this is an excellent celebration of the Grouse Grind season.

Hikers were first recorded on Grouse Mountain in 1894 when a hunting party shot a blue grouse bird and named the mountain in the bird’s honour. It wasn’t until the 1920’s and early 30’s, however, that Grouse Mountain saw the first big wave of adventurous hikers. Several thousand people flocked to the face of the mountain each year looking to reach the cabins located in the Grouse Mountain village at the foot of what is now known as The Cut ski run.
Today's Grouse Grind® was first developed in 1981 by mountaineers looking for a challenging, convenient aerobic workout to sustain them for their longer hikes. Seeking a steeper route than the British Columbia Mountaineering Club trail, they began following well-worn animal paths in the rough, completing the new trail in the winter of 1983.

A revival began in the early 90s, when the trail was appropriately named the Grouse Grind® in conjunction with the first ever Grouse Grind Mountain Run®, now Western Canada’s premiere trail challenge. The trail has become part of the fabric of Vancouver with more than a hundred thousand hikers a year taking on the challenge of the rugged terrain and steep climb, up an approximate 56 per cent slope (30°), which starts at the Valley Station of Grouse Mountain and finishes at the Peak’s plateau. In 1996, the original cast of builders, along with a number of enthusiasts from the B.C. Federation of Mountaineering Club and Grouse Mountain, rebuilt the trail ensuring optimum safety and enjoyment for the high volume of hikers while maintaining the highest level of environmental protection from erosion. 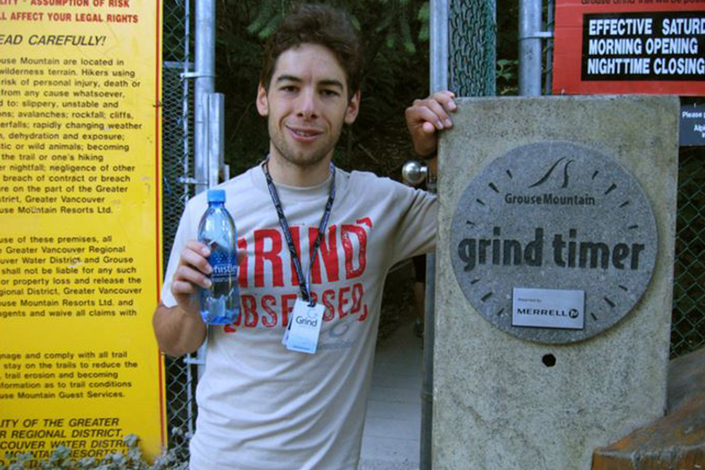 The official course record to date for men is 25:01 held by Sebastian Salas set at the 2010 BMO Grouse Grind Mountain Run®. For women, the record is 30:02 held by Madison Sands and set at the 2018 event. Unofficially (that is, a record set outside the annual Grouse Grind Mountain Run®) the course record is a blistering 23:48 that is also held by Sebastian Salas. He set this time on August 24, 2010. The previous record of 24:22 stood for six years and was set by two-time World Mountain Running champion Jonathan Wyatt of New Zealand. Jonathan set the record in June of 2004 while visiting Vancouver. The renowned runner has also participated in the Olympic Games and the Commonwealth Games.

To ensure you’re prepared for your visit, please check current conditions and the status of activities before arriving at Grouse Mountain.

Grouse Mountain is requiring all guests (born in 2009 or earlier) to be fully vaccinated against COVID-19.