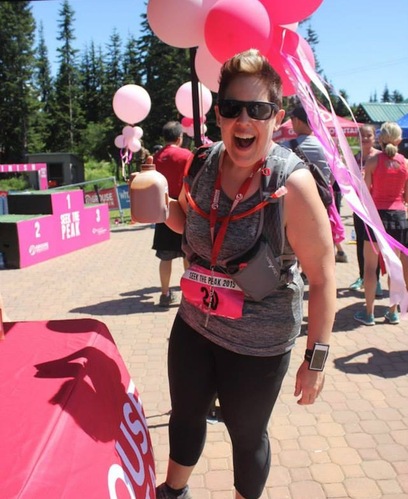 Each week we’ll be featuring posts from special guests designed to help get you ready for the big day. From nutrition and training tips, to motivational stories – each post will have valuable info to support your journey, all the way to the Peak!
When I finished my first 5km trail race in April 2014, the first words I uttered to friends at the finish line were, "I hated the hill!!". Less than a month later, I made the goal of completing Seek The Peak. I had recently lost 50lbs and was in the process of discovering a world of things I was capable of. I told a friend I was going to train and do it the next summer and she suggested, in the friendliest of ways, that I might want to take a couple of trips up the Grouse Grind before I made that decision. Here I was, wanting to do 16km race with 4100ft of elevation gain, when I had just finished a 5km, where my biggest takeaway was "I hate hills".
I did my first Grouse Grind a couple of weeks later. It took me 1:57 and at the top, my friend asked, "Still want to do Seek The Peak?". My answer was, "I don't know...", but I did know! I was back the next day, and through the summer I did the Grind 28 more times. For the next year, Seek the Peak was the goal I was working towards.
I was the 20th person to register for Seek the Peak and I'd also signed up for the training clinic, which was a huge step for me because all of my training had been in the gym and mostly on my own. The first night was just a large group of unfamiliar faces. We were introduced to the "pacers" and I'm not going to lie, I was a little intimidated by how "experienced" they looked. I remember thinking "What have I done?!". We were then told by Marieve Legrand, (lululemon ambassador, ultra-marathon runner, and Seek the Peak trainer extraordinaire), in no uncertain terms: "I won't sugar coat it, it's going to be hard, but I promise if you show up, you'll finish". After which she promptly threw us into the wonderful world of hill repeats...my favorite!! Before the night was through, I'd met 3 people, who to this day, are still my running buddies.
That 10 weeks of training was a roller coaster. Some nights as you ran and climbed you felt great and others you couldn't imagine ever completing the race. The pacers were always there, though, offering advice as we worked our way through the course. There are memories of them standing at the top of the stairs yelling the number of seconds I had before my "time" was up and waiting at the junction of a trail with the biggest smiles, or just chattering at you as you pushed to keep running.
The night before the race I had ALL the nerves. I just wanted to finish. Two of my friends had promised they'd be waiting with chocolate milk at the finish line and boy was that incentive! Race morning it was all blue sky, familiar faces and much laughter. As we left the start line I tried to remember tips from training - to hold back and save myself for the Grind. I ran legs 1 & 2 and walked Nancy Greene Way. I was listening! I'd gotten my time down to 1:13 during all the training on the Grind, so as I approached it I was sure I was ready. Oooor not. By the 3/4 mark "I can't" was going through my head a LOT. I was mentally done. I saw I wasn't the only one struggling and I thought of the first time I'd ever reached the 3/4 mark and it felt worse back then, than I felt at that moment. That was enough to keep me moving. I reached the top of the Grind way off what I'd hoped to and fought quad cramps as I approached the Peak. I felt like I was going slower than ever, but I wasn't! I looked at my watch as I got to the top and saw I'd just beat my personal best for the Peak. I'd pushed myself to a new PB climbing that one last hill, and I was on my way to the finish line. The home stretch was amazing. 200m from the finish I heard "STACEY!!! GO!! RUN!!". Suzanne, one of the pacers, had seen me coming down the trail and was jumping up and down and yelling...as I came around the corner I could hear so many people cheering. A group from training had been waiting for me and they were loud! Even though I was the last from our group to cross the finish line, I felt like I'd won and really I had. I'd finished!! And in 3:35! Just 5 minutes from my goal time! The support and excitement on that day from friends and the training group was incredible. I honestly can't tell you if I was in pain at the end, because I was just so happy.
Seek the Peak wasn't just a race that I finished. It introduced me to a community that has shown me nothing but kindness and support. I now run with the pacers I was intimidated by on that first night of training - every week. They're only a 'teensy' bit scary now and they've helped me get faster! I knew before I crossed the finish line that day that I'd be back for Seek the Peak version 2.0 ...and I am. I joined the training clinic again, and this year it's about seeing how much progress has been made each week. I can't wait to get back to that start line and see what awaits at the top!
If you're going to be on the hill with us, just remember to take it all in. The good and the bad! It's SO worth it!!
Stacey Anderson